Our reading group here in Santa Fe is lucky to have as a regular member one Bernadette Freeman, a graphic artist whose remarkable collage work can be seen at www.deco-collage.com, and this past Saturday, Bernadette had a fairly unique and I think accurate reading of the following paragraph from the Lestrygonians chapter in Ulysses:

His downcast eyes followed the silent veining of the oaken slab. Beauty: it curves: curves are beauty. Shapely goddesses, Venus, Juno: curves the world admires. Can see them library museum standing in the round hall, naked goddesses. Aids to digestion. They don’t care what man looks. All to see. Never speaking. I mean to say to fellows like Flynn. Suppose she did Pygmalion and Galatea what would she say first? Mortal! Put you in your proper place. Quaffing nectar at mess with gods golden dishes, all ambrosial. Not like a tanner lunch we have, boiled mutton, carrots and turnips, bottle of Allsop. Nectar imagine it drinking electricity: gods’ food. Lovely forms of women sculped Junonian. Immortal lovely. And we stuffing food in one hole and out behind: food, chyle, blood, dung, earth, food: have to feed it like stoking an engine. They have no. Never looked. I’ll look today. Keeper won’t see. Bend down let something drop. See if she.

This is Leopold Bloom’s famous interior monologue riffing, as usual, on whatever visual input happens to be in front of him. In this case, it’s a hardwood counter-top where he has just eaten a cheese sandwich and is finishing off a glass of Burgundy wine. As usual, the paragraph’s journey takes us from the concrete to the abstract and then back to the concrete, but with a difference.

Bloom’s journey can be outlined as follows: He sees the curvature of the wood-grain and imagines in its patterns the fleshy curvature of an idealized female body. There are statues of nude goddesses outside the national library (where Bloom is headed) just around the corner from Davy Byrne’s pub (where Bloom is presently located), and Bloom speculates on the lifestyle, the behavior, and ultimately the physiognomy of these goddesses – the sentence fragments near the end of the paragraph can be completed like so:

They [the goddesses] have no [anuses]. [I’ve] Never looked [to see if they do, though]. I’ll look today [at the statues]. [I’ll take precautions to ensure that the] Keeper won’t see [me ogling them]. [I’ll] Bend down let something drop. [And then I’ll] See if she [has an anus].

The comedy here is obvious. Even by contemporary standards, statuary postures are almost never so shameless as to allow for such detailed examination, and considering the kind of statues that would have been on public display in 1904 Dublin – forget it. Besides, statues are pure externality; the best Bloom can hope for here is to enjoy the outer curves of the female form.

So while the oaken curves at the beginning of the paragraph may be seen as invoking for Bloom the curves of a thigh, a hip, a breast, a rump, etc. Bernadette Freeman pointed out what wood grain looks like when it makes way for a knot, like so: 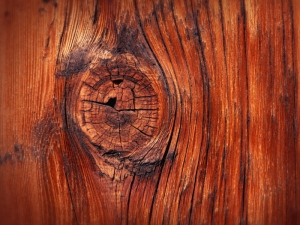 Put the caption “vulva” or “anus” under this photograph and the image becomes pretty indelible. Bloom is definitely prone to what Dan Savage calls “kinks,” and when he does visit the statues, his present kinkiness is unfortunately discovered – and broadcast – by none other than Buck Mulligan, who rather inexplicably infers from this encounter that Bloom is a homosexual who lusts after Stephen Dedalus.

Leaving this business aside, however, the question of where Bloom’s meditation is located is still not completely clear. Does the wood-grain immediately and fixedly represent orifices? This is Bernadette’s contention, but I see it a little differently. We can assume that Bloom’s visuaI cortex is on the wood-grain the entire time, but since knots are fairly rare in oak, I think Bloom starts with the conventional imagery of hips, thighs, buttocks etc. and eventually arrives at orifices through his own gustatory experience. Having just swallowed the last of his meal, he is in the process of “moving things along,” as it were, and as he digests, the passage becomes increasingly borborygmous in its tone. Bloom then sees the knot and resolves to examine the statues. As if to confirm this reading, he then gets up to relieve himself:

Dribbling a quiet message from his bladder came to go to do not to do there to do. A man and ready he drained his glass to the lees and walked, to men too they gave themselves, manly conscious, lay with men lovers, a youth enjoyed her, to the yard.

Anyway, that’s my interpretation of how the passage unfolds. What moved me to write this, however, was the suggestion by Bernadette that the wood-grain remains present during the entire meditation, not just the opening sentence. I’m reminded of John Gordon’s Finnegans Wake readings, in which he sees a straightforward sensory input informing every passage in the book, no matter how esoteric its prose may appear to be at first.

2 comments on “A Knotty Issue”

A-year-and-a-half’s worth of work, all in one blogpost!

Readings from the Lunatic Fringe

BIFF WHACK BOOM CLUCK!
It’s time to be ridiculous.
But not really…